And it appears that these organizers were sponsoring petitions, with the view that this lobby was an answer to income inequality. Yet, despite grass roots support this issue is receiving, “massive political turbulence,” with fair reasoning, in my opinion. And this attempt to, “repair,” economic inequality, through raising the minimum wage, is facing harsh criticism today, primarily for 2 reasons.

First, because increasing the minimum wage is a government tool for a free market issue.

Second, because increasing the minimum wage is a short sighted approach, to a long term problem. Whereby, in my opinion the larger issue at hand, is both corporate and individual greed. 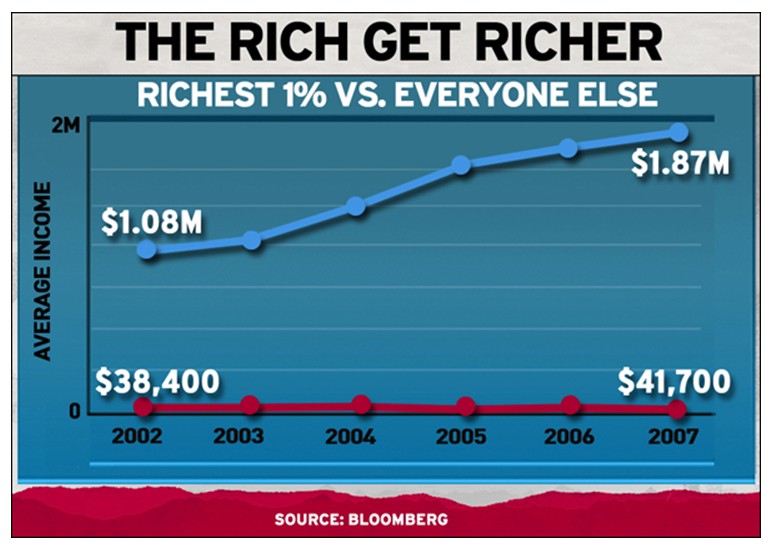 Image via Bloomberg and Google search, “the 1% income inequality.”

And expanding the minimum wage from 10… to 15 dollars an hour, would likely yield only the smallest of gains. That is my opinion and this is because minimum wage increases, in turn, often inflate genuine American currency. Which means that by increasing the minimum wage, the rest of the economy fluctuates as well,  particularly over time. Whereby, this short sighted approach then increases American’s cost of living, typically offsetting minimal gains, created in the short term.

And this, “minimum wage domino effect,” often makes income disparity just as bad as it was or sometimes even WORSE, in the long term.

*(Disagree? Submit an article to our site via the comments section below)… Image via Google search, “federal minimum wage by year.”

Nevertheless, it is my belief that increasing the minimum wage IS NOT CURRENTLY THE BEST SOLUTION, in terms of organizing against economic inequality.

Nevertheless, this issue is more complicated than simply raising the minimum wage and I believe that grass roots organizers essentially need to view this issue in terms of wage gaps and not simply minimum wage increases. Because the real issue, then becomes the difference between higher and lower class wages, which have continued to distance themselves over time.

The gap between the very rich and everyone else is wider than at any time since the 1920s. pic.twitter.com/f6pf3CYLxO

And in an ideal world… business owners would WANT to pay lower class workers, “a fair and honest wage,” in turn, boosting their own earnings and corporate reputations. Yet, unfortunately, today’s economy is not that way.

Nevertheless, in many ways paying workers a fairer wage, often benefits everybody in the U.S..

However, it’s also of my opinion that minimum wage shouldn’t be a matter of legislation. Yet, due to the shy and quiet nature of most Americans today, protests and concrete action never seem to take place, particularly in terms of American economics. And this is perhaps due to the sensitive nature of finding a career, in today’s day and age. Yet, the most corrupt offshoot of America’s constantly evolving, “prescription drug epidemic,” in my opinion, is essentially America’s willingness to accept anything short of, “a living wage,” to begin with.

Nevertheless, in conclusion… when corporations drive employees into the ground through unfair wages, businesses are doing nothing but hurting themselves, simply by paying employee’s unfairly. Yet, increasing the federal minimum wage doesn’t necessarily attack the heart of this issue… which is that unfair corporate pay structures and revolving door employment… are often American’s preference.

Civilians News – “News For All Views”